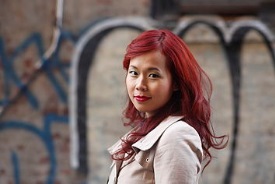 Phuong Anh was born and grew up in Vietnam, and her passion for literature and cinema prodded her to leave home to pursue her study abroad at the age of 16. After her high school Summa Cum Laude graduation, Phuong Anh was admitted to the Oxford University inEnglish Language and Literature, a difficult major for even native English students. At Oxford University, she directed and produced more than 25 staged plays. With her outstanding performance, she continued to pursuit her advanced study and received a Master’s degree in Theater Directing from the Royal Academy of Dramatic Art, one of the most famous drama schools in the UK. During thattime, Phuong Anh worked as an Assistant Director at the National Theater in London. She obtained an M.F.A.(Master of Fine Arts) in Filmmaking from the NYU Tisch School of the Arts in the US.

Her foray into Directing for the Screen started up in 2006 when her short film“The Convent Threshold” won the Best Student Short Films of Oxford University’s Films Festival (OxShort Film Festival), UK. Since then, she has made several short films which have been screened at numerous film festivals both in the US and internationally, such as: : Heart of a Doll (2011), The Silver Man (2011), Sam (2011), Grasshopper (2012)…. Particularly, her most recent short entitled Grasshopper also screened at the Cannes Short Film Corner and was honored with the Audience Award at the Un Pays Un Film (One Country One Film) Festival in Apchat, France.

Phuong Anh started “The Third Wife” as her first feature film as a screenwriter and adirector. Eventhis film has not been shot, its screenplay has been highly ratedby the international script writing community and has received major awardsuch as: thefirst prizeat the 14th Hong Kong Asia Film Financing Forum for a foreign film project, a semi-finalist at the 2014 ScreenCraft Screenwriting Fellowship,selected to the NYU Purple List for the best screenplays for 2015. Particularly, itsscreenplay was chosen as a recipient of the Spike Lee Film Production Fund in 2014. The Third Wife has started filming since late 2016.